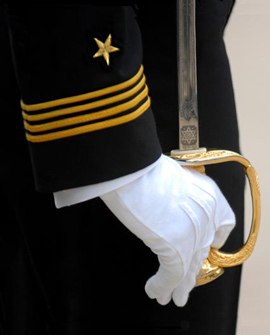 This site's target audience are ordinary people in Japan who have no idea about anything military. I hope to teach them some correct information about the U.S. service academies. The articles on this site concern basic information about each academy and offer a glimpse at what life in those institutions is like. By introducing a few human aspects into seemingly hard-core military subjects, I hope to catch the attention of civilians and tell them about the great attributes these young cadets/midshipmen have.
Academy-trained individuals succeed not only in military organizations but they succeed in life, too. They go on to serve as solid citizens in all corners of our society. What they went through at the academies and what they are capable of, should be known better amongst the general public. Yet there are people even in the US who have no idea about what the academies are or how they differ from boot camp. This is dissapointing.

So the goal of this site, if you must ask, is to offer some real stories about the morally, mentally and physically superb cadets and their families/friends. Stories so superb and moving that a movie or TV producer could not resist making a show about these fine young people. If the TV series is a hit, it would eliminate some misunderstandings about the academies, bring in more candidates to choose from, and old timers could of course tell young people about how much tougher the academies were back in his/her days.

Just think about it. You could cast literally thousands of young good-looking men into the show. And they wear the white uniforms! Talk about a gateway to success for new actors. Girlfriends of cadets could be excesively sexy or cute as the casting director wishes.
Moreover, the graduates range from SEALs, Green berets, international spies, front line doctors, astronauts, and even the president of the Unites States. From heart-warming stories to tear-jerkers to action-pieces, the choices are plenty. If it needs some extra spice, any foreign exoticism from the seven seas can be incorporated too.
Forget NCIS. Just ask Academy graduates and their families about their stories. That would fill up 8 seasons of good episodes easily.
Jeez, I should be working on a proposal to an agent, not on a hardly known website like this.

Your secret is safe. Really.

In Japan military topics are considered very peculiar. To be politically correct we do not even call our military "armed." Very few Japanese people under the age of 70 even know any military terminology at all. So perhaps young people will never be able to access this site because they do not have the right "keyword" vocabulary. I suspect the people who might be reading the articles are mostly military-related personnel and "military-Otaku."
Oh well.

Thus, I doubt this site will ever be heavily visited and the stories are not likely to become well known facts. I feel at liberty to write about actual incidents, perhaps even about a blooper or two of the former cadets/midshipmen. Of course, you never know - perhaps someone famous will tweet about this site someday.

Then, why is this site in Japanese? Well, to reach a Japanese audience, of course. But also consider this: Japanese manga and anime are very popular in various countries around the world. And those formats can very quickly adapt this "set-in-a-military-academy true story" idea and produce results. Also any interesting products or content that appear in Japan eventually get the world's attention.

No online-translation will come out right. Don't even try.

Now, there is one thing I need to ask for someone who tries to interpret what's on this site. Please please do NOT use "google translate". It does an absurd job of translating Japanese into any corresponding English. Unless you are trying to make a surrealistic joke sentence out of it (when Google introduced that dis-service in 2008, joke-loving Japanese internet users tried to outdo each other with the most bizarre consequences), it is a total waste of your effort.

The Japanese articles here are grammatically correct and make perfect sense to Japanese people.  I am a Japanese native and very good at the Japanese language. If Japan had SAT tests, I would have scored 800 in Japanese for sure.  OK. I flunked out in English because I never put any effort into studying it, thinking that automatic translating software would soon emerge and make any foreign language skills absolete. Well, I was way off in my prediction and somehow ended up living in an English-speaking country for most of every year. After three decades English-Japanese interpretation software is still in its infantile era. Look at Google translate: It changed "all around the world" into "all the world inside". There is a long way to go.
In any case, if you use an online translater and see weird sentence after sentence, its not me, it's GOOGLE!! Whichever page you are trying to translate, it's a decent article, I promise. Or at least the Japanese in the composition is decent. So don't worry about that. I haven't used any real names of cadets/midshipmen, either.

Why a Japanese person can not survive as a plebe

I just realized a Japanese person would have a huge disadvantage trying to survive in any English-speaking military academy. The reason involves an odd trait of our Japanese language system. In Japanese, if you are asked a negative yes-no question, the answer will be the opposite of what an English person would expect.

So what kind of consequences would this instinct lead to if he were a plebe? It would be a complete disaster. Let's say a upperclassman asks anything in a NEGATIVE SENTENCE. Under stress, even a Japanese student with perfect English grammer and some English speaking experiences, might get confused in that critical moment, making the fatal mistake of saying the exact OPPOSITE of what he meant.

Otherwise, any Japanese person who went to public schools in Japan is very pre-trained for the service academies. I am not kidding. We Japanese children do formations and march every morning outside, lining-up perfectly and then marching in military-fashion. The teachers stand atop platforms, making announcements and notifying students about recent changes in rules. The school principal might be up there giving a long boring speech. Or a PE teacher might be up there leading morning exercises. Sound familiar? 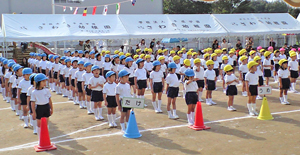 Pardon our appearance. We are only kindergarteners.

Of course missing a morning school formation or being late to it is a sin. Why would a Japanese school student be late? Because you walk to school from your house no matter how far it is and even during rain/snow/typhoons. Japanese school students have to carry all the textbooks and study gear packed in a hard leather backpack called a "land-cell". I believe it was an army officer's satchel at one point. 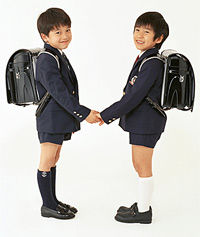 Some kids suffer heat strokes during hot summer formations (our summer vacation starts on July 25th and ends on August 31st). Everyone else has to remain at attention until the fainted kid is moved away, then they fill up the space to maintain precise distance from other students who are lined up in order of height.

We, ourselves, clean our own school buildings inside out, every day, including waxing and buffing with a self-provided swabbing cloth, by hand. The size, materials and all kinds of requirement about the cloth is issued with printed materials to the parents. Oh I've fogotten about the pre-season cleaning of the slime-green outdoor 25m swimming pool. Yes, that's right - the students clean the pool, too.

We eat lunch together on white tableclothes, usually 6-10 kids together in a group that is called a squad. It's a pretty healthy set meal of the day, quite tasty if the school cooks at site. We do all the table setting and serve the food ourselves. We take turns washing and ironing the tableclothes with our squad number written on it. Oh my, already at 7 years old we work harder than cadets do!

By the way a squad is called HAN (pronounced as "hahn") in Japanese, so the leader of the "han" is called HAN-CHO. Cho means a head of a group. The English slang term, "head-honcho," sounds really funny to Japanese people because - not only is it redundant, but it also refers to the really low-ranked head of the smallest group of a bunch of kids in Japanese. So the term is funny and cute. No offence. 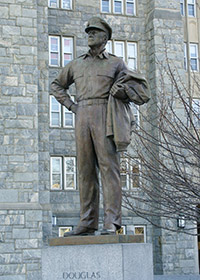 The resemblance of school kids to cadets goes on. We wear school uniforms and are not allowed to change a single detail about them. Our gym clothes are IDENTICAL to the ones they use at Annapolis. We parade around the school grounds with US Military march songs, which I did not realize until I saw a real military parade in the US.
I bet GHQ officers like Gen. MacArthur thought it was a good idea to give old West Point phonogrph records to the music-deprived war orphans in occupied Japan. Well, we know those marches by heart even though WWII was finished more than 70 years ago.

Because those marching music records came without lyrics, the songs aquired some kid-like alternative versions in Japanese. Can you guess which song goes with lyrics such as "Saru (monkey), gorilla, chimpanzees..." on and on? It's a British marching song called "Colonel Bogey." You can do a litmus test of native versus non-native Japanese by asking them about this lyric. It seems that we learned marches from all the allied forces countries, not just US.

Well, I would say the Japanese are ready to read about the service academies and share the sense of brotherhood. What do you think? Are you ready?